There are two types of containers used for displaying images. They are Galleries and Albums and there is a hierarchy for these containers that allows us to  display our images in an organised way. Basically images are stored in galleries, and galleries are stored in albums   An example can be seen below: 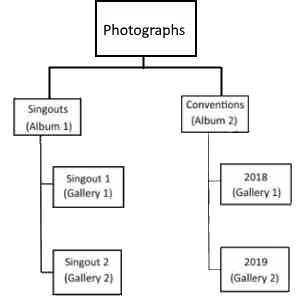 In my opinion the best way to start putting galleries and albums together is to organise the images on your computer. The image below demonstrates how a group of images might be put in folders for uploading to the galleries.

Examining the image shows a folder on a desktop PC called Second City Gallery Photos.  Note that this just my way of organising my galleries, you may prefer a different way. On the left of the image in the shaded area we can see the folder structure. So following a top down procedure we have albums, and albums contain galleries of which there are three: Conventions, Rehearsals and Singouts. If we now look to the left in the main window area we can see that I have selected the Conventions folder which has got two galleries: IABBS and Llandudno 2018. When we come to populate our albums on the site we will see that this structure aids us greatly in our organisation of our galleries. Also when we come to adding albums and galleries you will see remnants of my experimental work when developing the galleries section of the site. Just ignore these. For example when creating albums you will see numbers alongside the name of the album. These numbers are database id numbers and nothing to do with what we are doing. Continue now by watching the three videos below (excuse my lack of oratory skills LOL) 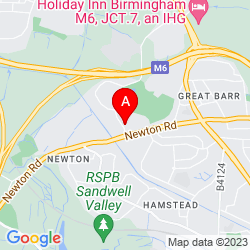